Home From the Web Why I Am an Atheist 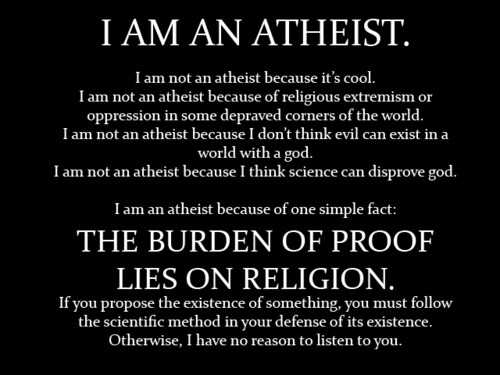 I am not generally a fan of memes. A few of them strike me as counterproductive, but as I’ve noted in previous posts on the subject, I find most of them lazy. It bugs me that so many atheists seem to be willing to do little more than regurgitate the same few over and over again. And yet, I have to concede that there are some good atheist memes out there that probably should be shared more often. The one included here is one of them. It isn’t perfect, but it has to be one of the most effective yet concise explanations for why many of us are atheists.

There are many different ways we can complete the “I am an atheist because…” stem. For example, I mentioned how I often do so here. But this meme goes a bit beyond that in a format that many atheists seem to prefer. After setting aside a few of the incorrect reasons some theists think we have for not believing in their preferred gods, the essential message is delivered: many of us are atheists simply because theists have not met their burden of proof. We do not need to argue against anyone’s preferred gods; we are atheists because they have not provided sufficient evidence to support a rational belief in their preferred gods. It really doesn’t need to be any more complicated than that.

Many of us would prefer to believe as many true things as possible and to believe as few false things as possible. I suspect this is not true of everyone, but I’d guess that most atheists would claim that it is true of them. That means we’d eagerly embrace belief in gods if the evidence supported it. But it also means we are not going to accept something as far-fetched as the existence of gods without sufficient evidence. To do so would open us up to believing one of those false things.

Christians love to claim that we don’t see evidence for their gods because we haven’t been looking for it. Many of them refuse to accept the fact that so many of us are ex-Christians who spent several years or more looking. But perhaps an even more important insight they seem to be lacking is their role in our de-conversion.

Suppose you grew up in a small town located next to a large forest. Everyone you knew told you that they saw a Bigfoot creature every single time they entered this forest. You believed them until you started spending time in the forest yourself. You never saw a Bigfoot creature. You kept returning to look. In fact, you spent countless hours in that forest desperately searching for Bigfoot because everyone you knew continued to insist that they always saw Bigfoot. If you replace Bigfoot with Jesus or gods and replace going into the forest with prayer, you will have captured my experience with Christianity extremely well. The fact that the Christians around me insisted that they experienced some sort of divine presence every single time they prayed even after I told them I never had made it impossible to maintain god-belief.

An early version of this post appeared on Atheist Revolution in 2011. It was revised and expanded in 2020.