Home From the Web Socialists Are The New Atheists (Sort Of)

A recent poll from Gallup came out this month that showed socialists are now the least trusted group to be president, and atheists now are only the second least trusted group. The survey showed that 60% of Americans would vote for a well-qualified person for president who happened to be an atheist, compared to only 47% for a socialist on the same conditions. 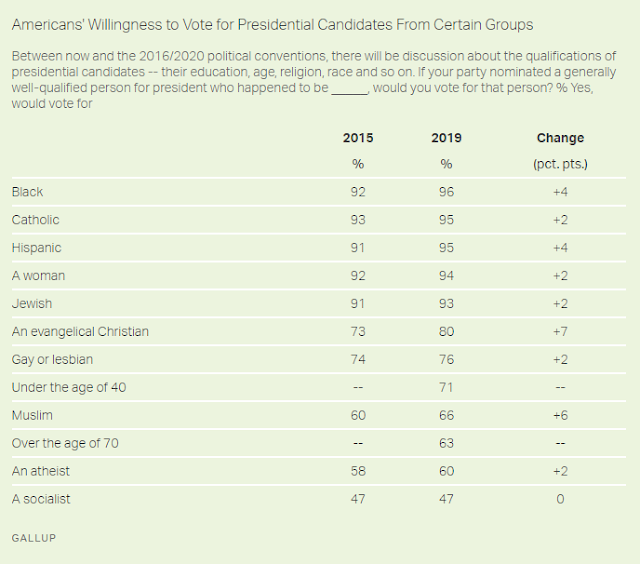 Twenty years ago, another Gallup poll showed that only 49% of Americans would vote for an atheist, similar to where socialists are now. While there are obvious differences in what a socialist is and what an atheist is (socialism is a political and economic ideology, whereas atheism isn’t), both carry negative stigmas, however. Both are, for example, unfairly associated with the worst of the communist regimes of the 20th century.

Still, while the acceptance today for an atheist president in the US is only 60%, it used to be only 18% back in 1958. That’s a 42 percentage point increase in 61 years. At this rate, atheist presidents will be accepted by all Americans by 2070! But I’m sure that will never happen, as there will always be a contingent of Americans who will never trust an atheist in the White House. Though given the trend, which could speed up in the coming years as Boomers begin to die off and the more secular Gen Xers and Millennials become the most important voting blocks, we should see a viable openly atheist presidential candidate at some point likely in the next 20 years.