Home From the Web On September 11… | Atheist Revolution 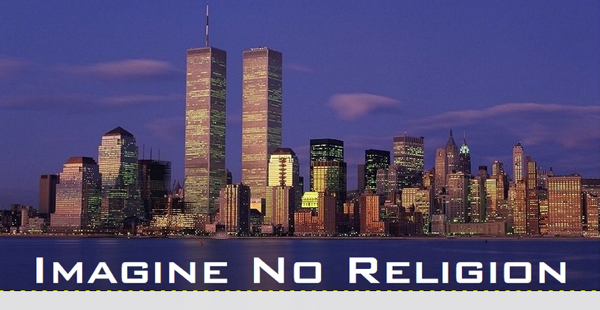 It is not like anybody is in danger of forgetting what happened on 9/11, at least not anytime soon. Still, I believe that this image and its caption have something important to say about one of the lessons of 9/11 that we must remember. It provides a partial answer to a question most atheists are asked from time-to-time: “What’s so bad about religion?“

The point is not to deny that no good is ever accomplished in the name of religion. Some good has come from religion, and many religious believers are good people. The point is that religion often facilitates evil in a way few other things can. I am an atheist because the evidence for the existence of gods is insufficient to support belief. I believe we’d all be better off without religion because of tragedies like 9/11 and from observing how religious belief often leads people to treat others. We deserve better.

On this and every anniversary of 9/11, I encourage you to join me in imagining a world without religion. The alternative, a status quo in which we seem to be mired, is unthinkable. Too much has been lost, and too much is at stake to risk losing more. We need to continue working to help our neighbors free themselves from religion, and we need to continue to strengthen the wall of separation between church and state. Our future depends on it.

An early version of this post consisting of not much more than the image above appeared on Atheist Revolution in 2012. It was expanded into this post in 2020 to urge people to continue imagining a world without religion and deepening our resolve to get there sooner.