Home From the Web Eternity, Free Will, and the World” Refuted — Part 4

A few months ago over at the Catholic apologist’s site Strange Notions, where I sometimes debate theists (but am now banned from), a post was written by Catholic philosopher Dr. Dennis Bonnette that was almost entirely addressed at some criticisms I’ve made on the site in the past year.

In this section of the post, Bonnette tries to answer the objections to god’s necessity and free will he’s written thus far, but on analysis he’s failed to fully articulate and understand the dilemma. He starts writing,


First, some think that God being the Necessary Being is inconsistent with the contingency of his free will choosing to create this world, which did not have to exist at all. Although God is the Necessary Being, this necessity refers primarily to his act of existence, since his essence is identical to his existence – thus, making it impossible for him not to exist.

Of course, all these claims merely attempts to define god into existence. It’s the word salad at the heart of Thomism’s case for god. Since I’ve already addressed this problem in past episodes of this series, I will move on to the heart of the matter:


The term, “necessary,” with reference to the divine nature cannot be capriciously defined to suit some contrived anti-theistic argument. Its meaning originates in the context of St. Thomas’ Third Way, which refers solely to a being whose necessity for existence comes from itself and not from another.4 Such a being must be that being whose essence is its very act of existence.

When I criticize the Thomist’s claim that god is necessary, I’m simply using the general, uncontrived, definition of something that is logically necessary, meaning, logic necessitates it’s outcome or truth. If what the theist means by “necessity” is really just suppositional necessity, then they are making a much weaker claim under the guise of a much stronger claim. I’ve argued this is deceptive, and is the lie at the heart of Thomism. He continues,


Hence, God’s necessity means primarily the necessity of his existence. As shown by St. Thomas above, that necessity also pertains to God’s willing his own goodness, since it is equivalent to his own being — but it is not necessary for God to will things other than himself.5

But again, you can’t define something into existence. Now I understand Bonnette is not making the case for god here and is instead responding to objections, and so he’s starting from certain statements he thinks are already proven elsewhere. I just see monstrous flaws in those statements to the extent that they are in no way proven. If it is not necessary for god to will things other than himself, that means everything god does will that is not necessary must have a contingent explanation. The Thomist’s own principle of sufficient reason demands it. Hence the dilemma in part 3.


Thus, when God chooses freely to create this world as opposed to any other, this choice does not make him to somehow become a “contingent” being. He is still the one and only Necessary Being, but he makes a free choice that in no way contradicts his existential necessity.

Nothing about the above is concluded from what came before it. God never “freely” chooses anything. And if we assume god does for the sake of argument, the reason why god chooses to create this world as opposed to any other must be due to contingent reasons. Since god’s essence is his will, and his will to create specific lesser goods is contingent, god’s essence is contingent. Hence, god is a contingent being that cannot be fully explained in principle by necessity. He continues,


Second, some object that God cannot have free will, since that would necessarily entail a change in him, which his immutability and eternity forbid. But this is to make the gross error of thrusting God into time – as though he was first not making a choice and then later making one, which would be a change in him.

Unless one misconceives God in a material, temporal fashion, the metaphysical insight required is to grasp that God’s very substance is an eternal act of will in which some objects are willed necessarily and others are willed non-necessarily. This is not an act having temporal duration in which choice begins at some point. God is simply his own act of choosing – a choice eternally identical with his very substance through divine simplicity.

According to Bonnette, god is an eternal, unchanging will, that could not have been different than what it is, and it’s will includes non-necessary things. That would mean it cannot be explained by necessity in principle, which can only mean god’s will must be explained by something contingent. This can only lead to an infinite regress of contingent explanations, which means god could not have freely willed it because every explanation to why god wills the unnecessary things must refer to something else, and the infinite regress itself will need an explanation, according to the Thomist. Hence god is logically trapped out of free will, since free will requires (among other things) not being forced by outside elements. A theist here is forced to claim god is not forced by outside elements, but there is no ultimate explanation why god wills the unnecessary things. By definition there can’t be.

And here is where the Achilles heel of the Thomistic case for god cripples them. Once you admit there are other logically possible gods, you cannot say your god is necessary. For if the theist claims our universe isn’t necessary because there are other logically possible universes, the same would apply to god. The theist can say the universe doesn’t have existence as its essence, but technically neither does god. The theist just defines god as having existence as its essence, but obviously I can define the universe the same way. The theist can come back and say such a claim is impossible because the universe came into being and undergoes change, but obviously that presupposes presentism is true (which no one can ever prove). The theist has to prove presentism or possibilism at the very least to make his case even have wings, let alone get off the ground. Dr Bonnette has tried to prove true presentist-sense motion happens on Strange Notions before but he does not know what he’s talking about. Motion doesn’t disprove eternalism. Motion simply means something different on eternalism. Motion simply means that in spacetime, worldtubes are not all parallel. They are angled relative to each other, which means that at different times they are different distances. That’s what motion is. This is why I love eternalism: it destroys the Thomist’s metaphysic.

The fact of the matter is is that if god can be “necessary” while there are “other logically possible” Gods,” so too is the case with the block universe: we have this universe, and given that it eternally exists, hypothetical alternatives are not metaphysically possible – given that the one and only actual universe exists (assuming there’s no multiverse for the time being). Hence, the Thomist has nothing on the atheist has far as explanatory power. He just pretends he does, disguised in fancy, philosophical dressing. That’s how he’s able to pull his charade. Dr Bonnette continues on,


What is de facto metaphysically impossible renders the alternative “logical possibilities” not logically possible at all, except as contrary-to-reality mental imaginings. That is, they are not actually real possibilities at all.

Ok, but then the same is true with an eternal block universe: it eternally exists, and although it is not logically necessary, no other alternatives are possibilities at all. In fact, this is a perfect time to have a side-by-side comparison of god and the block universe. 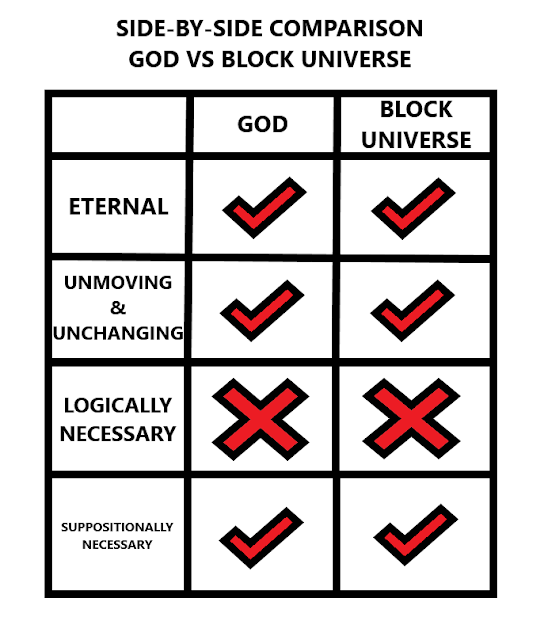 
God is actually able to do only what he actually freely wills to do, since on the supposition that he wills a certain choice from all eternity, that will cannot be changed — because of the divine immutability. Thus, there is, in fact, no distinction between what God is able to do and what he does do – but what he does do, he does freely with respect to goods that are less than his own goodness.

Dr Bonnette of course has no justification in saying god freely wills anything. He simply calls god’s unnecessary will “free” since the other will is necessary. The fundamental explanatory problem of why this unnecessary will vs a different unnecessary will is still there. Since a necessary explanation is off the table as an option, the will can only be explained by an infinite regress of contingent explanations.

Thus is resolved the problem of God’s nature “determining” his choice.

Being determined to will lesser goods does not entail those lesser goods are done freely. It is logically possible to be determined to will something that isn’t necessary. Furthermore, the claim of being “perfectly free” if granted for the sake of argument, does not get god out of the underlying dilemma that since it is the will in question isn’t necessary, any explanation to why it is X rather than Y must have a contingent explanation, given the aforementioned Thomist’s own PSR, thus the dilemma.

This dilemma is not refuted anywhere in Bonnette’s post, and given that according to the principle of sufficient reason:

I technically do not need to include the two options in (a). I could just say all explanatory chains must eventually terminate in a necessary explanation and still justify my point. God’s “free will” cannot be used as an explanation, because even something freely willed must have an explanation. It’s the type of explanation that implodes the theist’s case.

And that wraps up part 4. Some of this is indeed a bit redundant, but it’s necessary for me to stress the point.

When closely examined, you can see that for all the sophistication on Strange Notions, the arguments there implode under scrutiny. Dr Bonnette simply has no case for god’s free will, and the linchpin of his case for god, and for that of Thomism, is exposed as nothing more than a clever word play, implying a logical necessity for his god’s existence, yet it is really just an after-the-fact claim for his god’s suppositional necessity—a claim the atheist could make about an eternal block universe. I will follow up with the refutation for part 5 shortly.